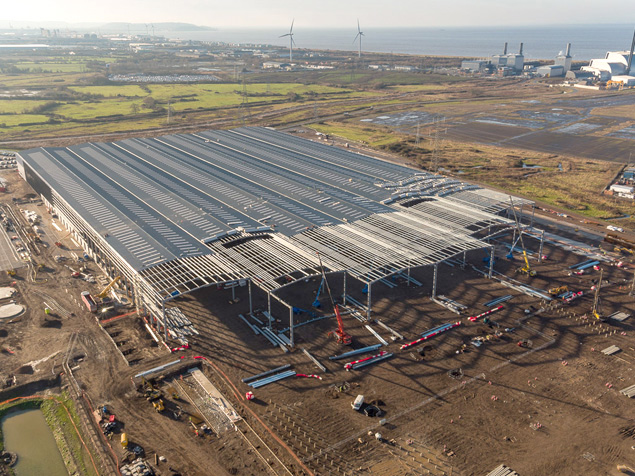 Central Park in Avonmouth has experienced an unprecedented year of activity as the region’s largest ever distribution warehouse – the 1.2 million sq ft building for The Range – begins to take shape on land acquired there earlier in the year.

New aerial pictures have revealed the true enormity of the construction. Built on 55 acres, The Range is constructing the single footprint unit as its new South of England distribution centre.

The centre will support the store’s growth and is expected to bring more than 1,050 new jobs to the area. Construction will be complete later in spring 2017.

The new aerial photos show the extent of the new development and how it is taking shape.

Central Park is one of the largest distribution development projects in the UK, situated alongside the M49 at Avonmouth.

“This activity is unprecedented in the region,” said Paul Hobbs, director at GVA. “It puts Central Park on the map as one of the UK’s most successful distribution parks this year and its significance for Bristol and the South West should not be underestimated.”

Paul Hobbs added: “Central Park benefits from a unique planning permission which allows immediate development of B8 – that is, storage and distribution space.

“Together with the commitment of Delta Properties to invest in a major road, rail and utility infrastructure, this has resulted in a distribution hub of national significance which continues to attract major occupiers such as The Range.

“Plans for the new M49 junction promoted in support with the LEP, coming straight into Central Park, are almost finalised and will further enhance the scheme and lead to further growth.

“The 2.45 million sq ft of simultaneous construction in 2016 marks an unparalleled year for any national scheme.”

The new projects under development will provide 2,500 new jobs to the Severnside/Avonmouth Enterprise Area in addition to construction jobs.

“The former is addressed by Central Park providing a vast ready-to-go opportunity with extant permission in place and the latter by a new, imminent junction on the M49, due for completion in 2019. We are delighted with the pace of growth at Severnside, with Central Park providing economic benefits for the whole region (not just South Gloucestershire), from a retail, employer and supply-chain perspective.”

“With record take-up, the declining supply of high quality space in the last 12 months has led to virtually no prime standing stock available at all, which is a common factor across most of the UK industrial markets.

“As a result, we are seeing the return of significant speculative industrial development with activity at several locations.

“We believe that the supply of vacant standing stock across all industrial markets in Bristol possibly stands at its lowest levels ever and 2017 will be a challenging year for occupiers who need to source growth and relocation opportunities against tight timescales.”

Tim Davies, of Colliers International, said: “The Avonmouth region is ideally situated for distribution and with first class rail, road and sea connectivity the location has all the key criteria for a top class intermodal facility. Moreover, there is plenty of vacant land ‘oven ready’ for new development. The importance of the location as a natural distribution hub has been recognised by many global companies who have developed huge facilities in the area.

“Tesco, ASDA, Coop, and Amazon, amongst others have already developed huge facilities in the area and next year The Range will develop one of the largest warehouses in the UK of almost 1.2 million sq ft. On top of that, Lidl will develop another 600,000 sq ft.”